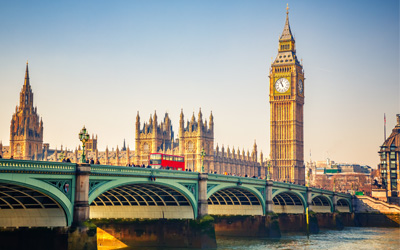 Arrival at London Heathrow Airport. You will be met by your local guide and coach driver. Get your first impression of London through a guided city tour. Highlighting of this tour will be Big Ben and Parliament, Trafalgar Square with the Lord Nelson Column, Piccadilly Circus, the Shard and London Bridge. Afterwards you will visit the Tower of London. It is by far one of the most famous and well preserved historical buildings in the world. During its history, the Tower has been a palace, prison, treasury, zoo and arsenal. Nowadays the Crown Jewels are on display here. Afterwards visit St. Paul’s Cathedral. Sir Christopher Wren’s mighty cathedral draws the eye like nothing else in London, even though the city’s skyscrapers rise above the tower. The centrepiece of the great reconstruction of London after the great fire in 1666 and it is still the spiritual focus of Great Britain. You can pay respects at the American Memorial Chapel dedicated to those based in Britain that died during WWII. Check in at the hotel and have some time to relax before dinner. Welcome dinner and overnight in London. 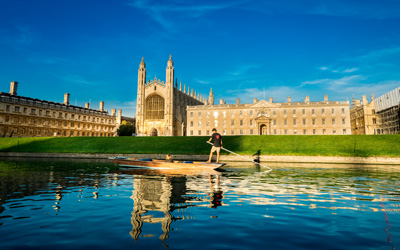 This morning you will travel to Cambridge, most widely known as the home of the University of Cambridge, which was founded in 1209 and is consistently ranked one of the top five universities in the world. A local guide will show you around, past the University and its thirty one colleges which  dominate the centre with beautiful cobbled courts, chapels, gardens and bridges. You will see Christ’s College, where a young Charles Darwin studied and King’s College whit its late Gothic architecture and many more. In the afternoon you will venture a short distance to Duxford where you will visit the American Air Museum. The award-winning museum building was designed by celebrated British architect, Lord Norman Foster. The  museum is home to the best collection of American military aircraft, vehicles and artillery on public display outside of North America. The museum tells the story of two nations united through war, loss, love and duty, from the First World War to the present day. Travel back to London. Overnight in London. 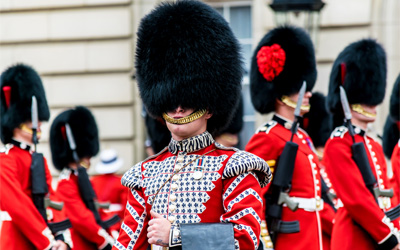 This morning Thames river cruise from the Tower of London to Westminster Pier. Explore this exciting city from the water. Afterwards, visit the Westminster Abbey where royalties are christened, married and buried. Every day at 11:30 am there is the changing of the guards at Buckingham Palace. If you like you can watch these 45 minutes during ceremony. In the afternoon you will visit Churchill Museum and Cabinet War Rooms. Discover the secrets hidden beneath the streets of Westminster in the underground nerve centre where Winston Churchill and his inner circle directed the Second World War. Later that afternoon, the coach will drop you at the place to be for shopping and entertainment also known as ‘West End’. Evening at leisure.
Overnight in London. 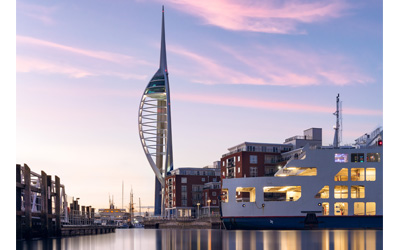 After breakfast you leave London and travel to Portsmouth. Before boarding the ferry to France you will visit the Portsmouth D-Day Story Museum. It is the only museum in the UK dedicated to the Allied Invasion in June 1944. It tells the unique personal stories behind this epic event. The museum’s unique and dramatic film show uses archive film to bring back memories of the wartime years. There are also extensive displays featuring maps; uniforms and other memorabilia; several vehicles and even a real LCVP landing craft.You continue to Portsmouth Port where a ferry will take you across the English Channel to Normandy. Dinner on board. You will arrive in Caen-Ouistreham in the evening.
Overnight in Bayeux or Caen. 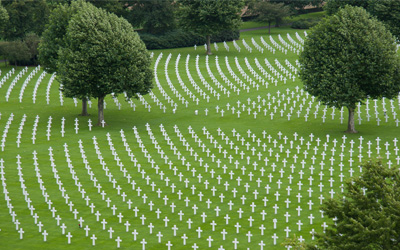 Today you will have a full day excursion to the World War II sites. Your first destination will be Utah Beach, the site of the first allied beach landings on D-Day. Travel onwards to Sainte-Mère-Église, considered to be the first town liberated in France, and also depicted in the film “The Longest Day”. Visit he Airborne Museum, which makes you experience and understand the D-Day landing, from the invasion preparations in England to the battles for liberation. The museum is located opposite of the church where John Steele famously was caught, hanging on the bell tower with his parachute. Next, you will visit Pointe du Hoc, walk across the bomb-scarred terrain and see the Pointe du Hoc Ranger Monument at the top of the cliffs. Continue your way to Omaha Beach, where you will see ‘the Wings of Hope, Freedom and Fraternity’. Your last stop for today will be the American Cemetery and Memorial near Colleville-sur-Mer, the final resting place of nearly 10,000 members of the US military. You will also see the Visitor Centre, where several films are played and home to poignant exhibits that depict the stories and operations of the American soldiers. After this moving visit you will return to your hotel. Overnight in Bayeux or Caen. 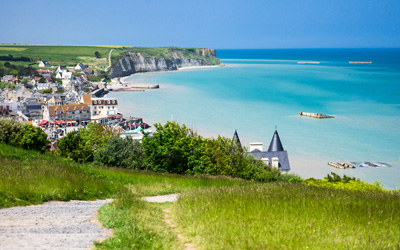 Today starts with a visit to Arromanches where one of the Mulberry Harbors was constructed and where its remains can still be seen today, just a few hundred yards from the shore. You will visit the Arromanches Landing Museum. The museum offers a fascinating insight into how the famous artificial harbour worked. You will travel onwards to Longues-sur-Mer to see the German artillery battery used in the filming of ‘the Longest Day’. Afterwards, enjoy some time at leisure in the quaint and typical French, harbour town Port-en-Bessin Huppain. In the early afternoon you will have a guided visit to the Juno Beach Centre and the Juno Beach Park. You will see the  remains of the Atlantic Wall, recounting the history of the D-Day Landings via the Canadian point of view.  Remainder of the afternoon at leisure in the charming town of Bayeux. Not to be missed here is the Old Town, the Bayeux Cathedral, a gem of Norman and Gothic architecture, the Bayeux Tapestry and the banks of the river Aure with old restored mills and wash houses. Overnight in Bayeux or Caen. 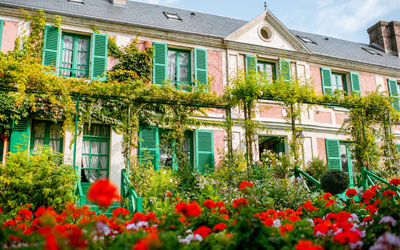 Today you will travel through the French countryside to the charming village of Giverny, home to Impressionist painter Claude Monet. You will have lunch together in Giverny and then will travel to Versailles. Enjoy a guided tour of Château de Versailles. The magnificent palace offers architectural splendor and artworks from 17th and 18th century  and has been a UNESCO World Heritage site for over 30 years. Besides the Château, you can marvel the Trianon Palace, the musical garden and the  palace park gardens as well. After this mesmerising visit the journey continues to Paris, the City of Lights, where you will arrive in the late afternoon.

Dinner and overnight in Paris. 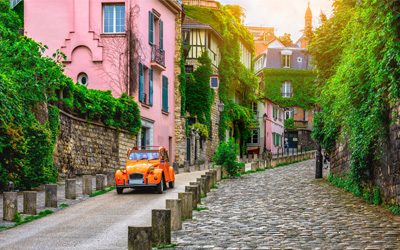 After breakfast, enjoy a guided city tour to see the highlights of the city by coach and on foot. You will see the Notre-Dame Cathedral, the Opéra Garnier, l’Arc de Triomphe, Avenue des Champs-Élysées, Place de la Concorde and the Eiffel Tower. Enjoy a guided walk through the characteristic neighbourhood Montmartre. A district full of authentic charm, famous for the Sacré-Cœur. This Basilica, consecrated in 1919, is one of the most iconic monuments in Paris. A short walk from the Sacré-Cœur is Place du Tertre and the district of Abbesses with its steep, winding roads. The afternoon is at leisure. The possibilities to explore Paris are endless; as an art lover you might want to visit Musée d’Orsay and Musée de l’Orangerie des Tuileries with works by Van Gogh, Monet, and Cezanne.  You might want to climb the Eiffel Tower for a spectacular city view from the top. Shoppers can indulge themselves at the famed department stores Galeries Lafayette and Printemps. Overnight in Paris. 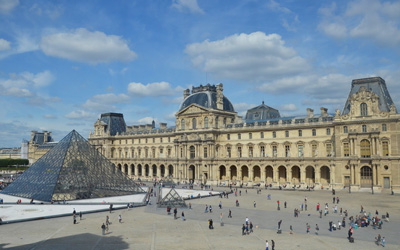 This morning you will visit the most famous museum of the world; Musée du Louvre. Your local expert guide will guide you through the different wings of the museum. Besides the most famous artworks in the world, like the Mona Lisa by Leonardo da Vinci and the Grecian Venus de Milo you will also see masterworks by Michelangelo, Botticelli, Raphael, Caravaggio, and Veronese. The afternoon is free to discover this vibrant and bustling city even more. Enjoy a memorable farewell dinner at the Eiffel Tower this evening. Enjoy the food and the spectacular view over Paris.
Overnight in Paris. 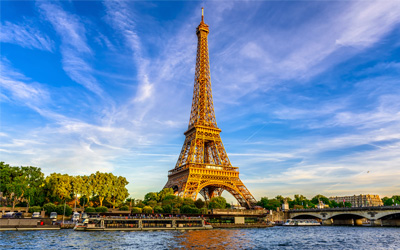 After breakfast you will depart for Paris Charles de Gaulle Airport for you flight back home.

We use cookies on our website to give you the most relevant experience by remembering your preferences and repeat visits. By clicking “Accept All”, you consent to the use of ALL the cookies. However, you may visit "Cookie Settings" to provide a controlled consent.
Cookie SettingsAccept All
Manage consent

This website uses cookies to improve your experience while you navigate through the website. Out of these, the cookies that are categorized as necessary are stored on your browser as they are essential for the working of basic functionalities of the website. We also use third-party cookies that help us analyze and understand how you use this website. These cookies will be stored in your browser only with your consent. You also have the option to opt-out of these cookies. But opting out of some of these cookies may affect your browsing experience.
Necessary Always Enabled
Necessary cookies are absolutely essential for the website to function properly. These cookies ensure basic functionalities and security features of the website, anonymously.
Functional
Functional cookies help to perform certain functionalities like sharing the content of the website on social media platforms, collect feedbacks, and other third-party features.
Performance
Performance cookies are used to understand and analyze the key performance indexes of the website which helps in delivering a better user experience for the visitors.
Analytics
Analytical cookies are used to understand how visitors interact with the website. These cookies help provide information on metrics the number of visitors, bounce rate, traffic source, etc.
Advertisement
Advertisement cookies are used to provide visitors with relevant ads and marketing campaigns. These cookies track visitors across websites and collect information to provide customized ads.
Others
Other uncategorized cookies are those that are being analyzed and have not been classified into a category as yet.
SAVE & ACCEPT