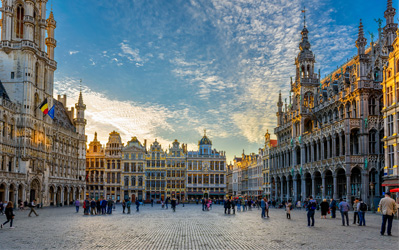 Welcome in Belgium! Arrival at Brussels International Airport. Meet your driver and tour escort, and transfer to the city centre of Brussels and enjoy a guided city tour by coach of.  See the main sights of Brussels such as the Royal Palace, the Palace of Justice, which is larger than St. Peter’s in Rome. This impressive structure rules the Brussels skyline and can be seen from almost any vantage point in the city. The tour will continue on foot in the old town to see the Market Square, with beautiful houses and of course you don’t want to miss ‘Manneken Pis’. This unique Brussels icon has been amusing visitors on the corner of Rue de L’Etuve & Stroofstraat since 1619. In the afternoon you will travel to Bruges, also called “the Venice of the North”. Check in at the hotel and have some time to relax before dinner.
Welcome dinner and overnight in Bruges. 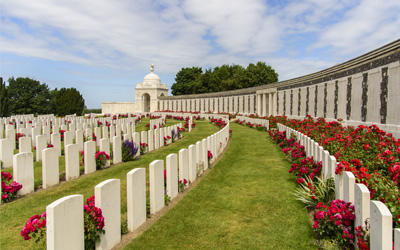 This morning, your local guide will show you charming Bruges. You will see the Holy Blood Cathedral, the Belfort, the Lake of Love and the UNESCO World Heritage listed Beguinage and historic centre with its canals, lace workshops, ancient buildings. In the afternoon you will drive to Ypres in the Southwest of Belgium. Upon arrival you will have a guided visit to the Flanders Field Museum in Ypres. The Flanders Field Museum presents the story of the First World War in the West Flanders front region. It is located in the rebuilt Cloth Hall of Ypres, an important symbol of wartime hardship and later recovery.
Overnight in Ypres. 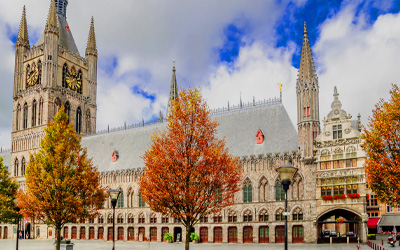 This morning you will travel to Zonnebeke for a visit to the Memorial Museum Passchendaele 1917. The Memorial Museum brings the historical story of the First World War in a poignant way with special attention to the Battle of Passchendaele. After the museum visit, you will see the true-to-life reconstruction of German and British trenches. Some of the biggest battles of World War I are explored at Ypres Salient in Belgium. You will visit the Tyne Cot Cemetery, the largest Common Wealth cemetery in the world with 11,956 graves. See the Brooding Soldier Memorial in Langemark, dedicated to those who were killed during the first chemical attack on the Western Front. Pay a visit to the Essex Farm Cemetery where John McCrae wrote his immortal poem, ‘In Flanders Fields’. In the early evening you will witness the moving Last Post Ceremony at the Menin Gate to commemorate the soldiers who laid down their lives more than a century ago. Overnight in Ypres. 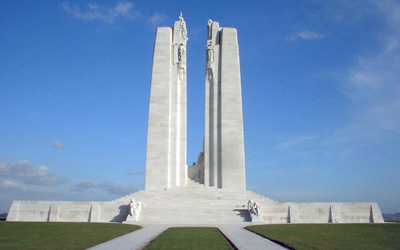 This morning you will travel to Vimy Ridge to visit the Canadian Memorial, Vimy Memorial Park and the Visitors Centre. This memorial is dedicated to all Canadians who served their country in battle during the Great War of 1914­ – 1918, especially those who died in France having no known grave. Before travelling to Arras, you will visit the ‘Ring of Remembrance’, which honours the 576.606 soldiers of 40 nationalities who died in World World I battles in the Nord-Pas-de-Calais area. Uniquely for a war memorial, the names are listed in alphabetical order rather than by rank or nationality. Journey onwards to Arras. Upon arrival an expert guide will escort you through the tunnels of the Welligton Quarries. During the second half of 1916, the New Zealand Tunneling Company built and connected an extensive network of underground tunnels southeast of Arras. In order to  get closer to enemy lines and thus create a surprise attack on German lines. April 9, 1917, the start of the Battle of Arras, 24,000 British soldiers walked out of the tunnels and surprised the first enemy lines completely. Overnight in Arras. 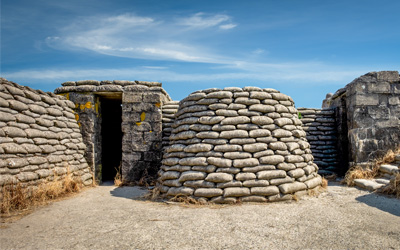 Today you will tour the Somme Battlefield and visit one of the few intact First World War battlefields, Beaumont Hamel. This Canadian National Historic site, remains as it was during the Battle of the Somme. Now dedicated to the Newfoundland’s only Regiment which suffered horrendous casualties on the first day of the Battle of the Somme. Afterwards, visit the nearby Memorial to the Missing at Thiepval, which is the largest Commonwealth Memorial in the world,  commemorating the names of over 72,000 missing. The journey continues to Albert, along the route you will stop to see the Lochnagar Crater. This crater with a diameter of 100 meters and a depth of 30 meters is the result of a British action that heralded the Battle of the Somme. In Albert you will visit the Trench Museum Somme 1916. The museum is located in an underground passage, beneath the basilica of ‘Notre Dame de Brebières’, and provides insight into what life must have been like for soldiers in the trenches. Your last stop for today will be the quaint town of Amiens. Overnight in Amiens. 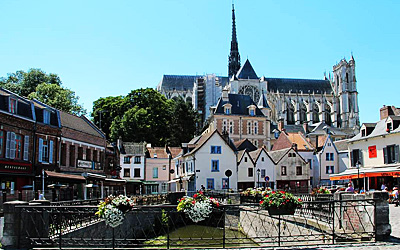 Following breakfast, enjoy a guided walking tour of Amiens. A local expert guide will show you the UNESCO World Heritage listed, Notre-Dame Cathedral, the largest Gothic church in France, the Tour Perret, the first skyscraper built in Europe, and the Maison Jules Verne, which displays models of flying machines and naval ships made by the city’s most famous author. You will walk the picturesque cobblestone streets of the Centre-Ville and the Quartier Saint-Leu. In the afternoon you will travel to Péronne to visit the Museum of the Great War, which is housed on the grounds of Château de Péronne. The museum is the largest museum in Europe dedicated to World War I and strives to place the war in a social context, stressing “the common suffering of the combatants and civilians, who were equally mobilized by the war effort”.
Overnight in Amiens. 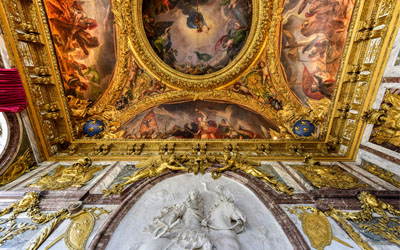 This morning you will leave Amiens for Versailles. Upon arrival, enjoy a guided tour of Château de Versailles. The magnificent palace offers architectural splendor and artworks from 17th and 18th century  and has been a UNESCO World Heritage site for over 30 years. Tour the lavish home of Louis XIV, see the Royal Chambers, the Royal Chapel, the Opera House and of course the Hall of Mirrors, where the Treaty of Versailles was signed, ending World War I.
After this mesmerizing visit, the journey continues to Paris, the City of Lights.
Overnight in Paris. 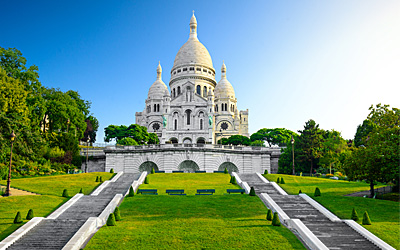 Get your cameras ready for a coach tour of the most photogenic city on earth. A local guide will show you the treasures of Paris, including views of the Eiffel Tower, Notre Dame cathedral, the Opera Garnier, Arc the Triomphe, the Champs Elysees and the Place de la Concorde. After the tour you’ll visit the Hôtel National des Invalides which was once a Military Hospital. Nowadays the building, with its famous dome, is a museum, mainly dedicated to the French Army and houses the tombs of famous French Military such as Napoleon I and Marshall Turenne under the Dome. Visit the World War I section of the museum. The afternoon is at leisure. The possibilities to explore Paris are endless; as an art lover you might want to visit Musée du Louvre or Musée d’Orsay.  You might want to climb the Eiffel Tower for a spectacular city view from the top. Shoppers can indulge themselves at the famed department stores Galeries Lafayette and Printemps. Conclude this moving and mesmerizing tour with a dinner cruise on the River Seine or at the Eiffel Tower. Overnight in Paris. 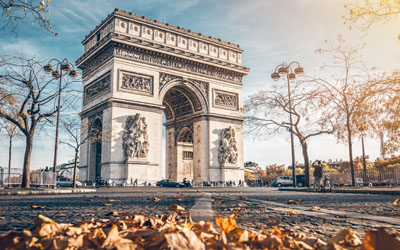 After breakfast transfer to Paris Charles de Gaulle Airport for your flight back home.

We use cookies on our website to give you the most relevant experience by remembering your preferences and repeat visits. By clicking “Accept All”, you consent to the use of ALL the cookies. However, you may visit "Cookie Settings" to provide a controlled consent.
Cookie SettingsAccept All
Manage consent

This website uses cookies to improve your experience while you navigate through the website. Out of these, the cookies that are categorized as necessary are stored on your browser as they are essential for the working of basic functionalities of the website. We also use third-party cookies that help us analyze and understand how you use this website. These cookies will be stored in your browser only with your consent. You also have the option to opt-out of these cookies. But opting out of some of these cookies may affect your browsing experience.
Necessary Always Enabled
Necessary cookies are absolutely essential for the website to function properly. These cookies ensure basic functionalities and security features of the website, anonymously.
Functional
Functional cookies help to perform certain functionalities like sharing the content of the website on social media platforms, collect feedbacks, and other third-party features.
Performance
Performance cookies are used to understand and analyze the key performance indexes of the website which helps in delivering a better user experience for the visitors.
Analytics
Analytical cookies are used to understand how visitors interact with the website. These cookies help provide information on metrics the number of visitors, bounce rate, traffic source, etc.
Advertisement
Advertisement cookies are used to provide visitors with relevant ads and marketing campaigns. These cookies track visitors across websites and collect information to provide customized ads.
Others
Other uncategorized cookies are those that are being analyzed and have not been classified into a category as yet.
SAVE & ACCEPT